The Sikh baptismal Amrit ceremony of initiation has its origins in early April of 1699 on the Vaisakhi festival of ancient Punjab.
Guru Gobind Rai, the 10th guru of the Sikhs, stood with his sword in hand, and called to a crowd of thousands who had assembled in the Fort of Kesgar at Anandpur. He asked for volunteers willing to give their heads. The five men who stepped forward are known as the five beloved ones, or Panj Pyara:

The panj pyara gathered inside a tent. They knelt over an iron bowl to prepare Amrit, the immortalizing nectar of initiation. Jeeto, the wife of Guru Gobind Rai, added sugar to the water in the bowl. The five beloved ones stirred the Amrit with a double edged iron sword. Guru Gobind Rai submitted himself to the panj pyara and asked to be baptized. The five beloved ones performed his baptism by giving him the Amrit to drink and initiated him into the order of Khalsa. Afterwards, he and his wife became known as Guru Gobind Singh and Ajit Kaur. The five beloved ones went on to baptize thousands of people. The Khalsa initiates of 1699 drank the immortalizing nectar of Amrit to prepare for battle with Mughals who had been forcing local populations to convert to Islam by sword point.

The anniversary of the first Amrit ceremony is celebrated on Vaisakhi Day, in early April. Sikhs gather for programs and festive events which take place at Gurdwaras all around the world.

Early morning:
Usually an Amrit initiation ceremony, is held. It may take place any time of day that is most convenient. It could begin several hours before dawn, or be held during an all night program which goes on until sunrise.

Anyone who wishes to be baptized must present themselves to five Sikhs who are the representatives of the original panj pyara. The ceremony takes several hours to complete. The panj pyara prepare the Amrit by stirring sugar into a bowl of water as they recite certain prayers. They administer the Amrit to initiates in a particular manner. Initiates promise not to cut their hair, and to wear the five articles of faith. They agree to follow the tenets of the Sikh faith.

A worship program may start off the day at the Gurdwara early in the morning. The worshipers sing popular hymns which commemorate Guru Gobind Singh and focus on drinking Amrit:

Gur simar manaa-ee kanday kee vaylaa||
Remembering who controls birth and death brings God close, it is time to take up the sword.

Gur sangat keenee khalsa manmukhee duhaylaa||
The pure ones belong to God’s congregation, the worldly ones far away. 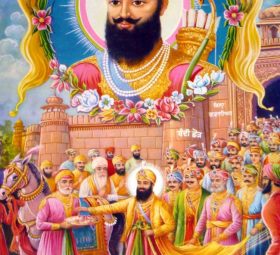